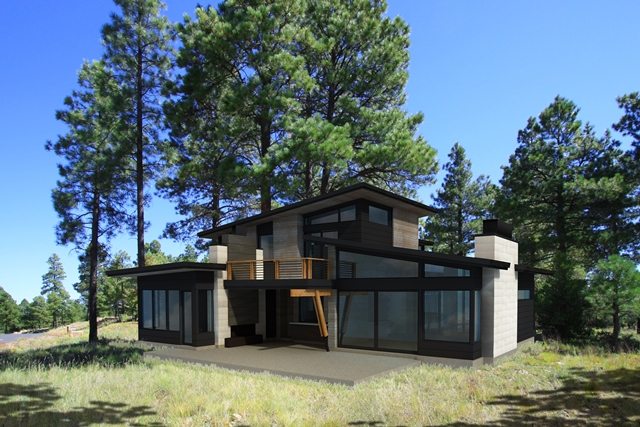 Mountain architecture is a phrase that has wide-ranging context. Offer it up in conversation with a couple of friends, and it may inspire different images for each of them. One constant truth is that mountain architecture goes beyond a tiny house built from Lincoln Logs.

Mountain architecture has traditional and modern elements, both of which can be found throughout Pine Canyon. In fact, the community’s newest neighborhood, Coconino Ridge, encourages bold, modern design in a way that embraces the extraordinary environment around it.

Some of those classically modern elements include typically contemporary touches often expressed in mid-century modern homes, yet at a higher elevation.  From sleek lines to sharp angles, modern mountain architecture is identifiable by crisp hallmarks of design that somehow fuse symmetrical and asymmetrical composition. For example, a modern mountain home may showcase an asymmetrical roofline while incorporating perfectly symmetrical window grids.

When it comes to aesthetics, both modern and traditional mountain architecture include the use of natural materials, from stone to wood, and yes, even logs as front-porch pillars or accent pieces. However, modern mountain retreats usually rely more heavily on steel, glass, and stone than traditional styles do. Both modern and traditional styles also include large outdoor living spaces, allowing owners to inhale and experience the natural beauty that surrounds them.

So, what exactly does traditional mountain architecture look like? It varies, but generally includes a gable roof, which “This Old House” describes as the triangular roofs used when a child draws a house. Sometimes dormers are used, and usually, traditional mountain retreats use more wood, inside and out, than their modern counterparts.

Regardless of style, mountain architecture, in general, is described by HGTV as having a “livable warmth.” And, that truly speaks to the comfort of the homes at Pine Canyon, no matter the season.