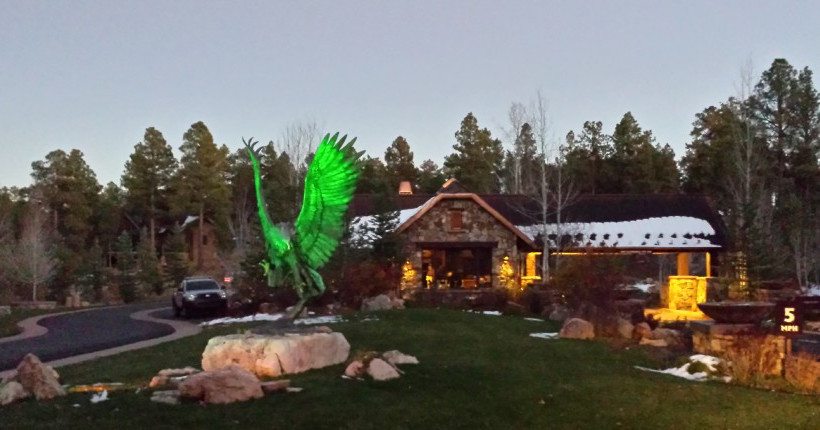 To celebrate Veterans Day and honor current and former military members and their families, Pine Canyon is participating in the “Greenlight a Vet” program throughout November by using green lights to illuminate the community’s eagle sculpture and trees near the entry gates. Residents are invited to show their support, too, by changing at least one light on their homes to green.

“Greenlight a Vet” was launched as an advocacy campaign in 2015 by Walmart under its Veterans Welcome Home Commitment program that aims to hire 250,000 veterans by 2020. The retailer initiated “Greenlight a Vet” with the hope of calling attention to the professional and personal struggles many veterans face after their military service ends. The campaign calls for Americans to display green lights on their homes and offices to show support for the more than 2.5 million families who have dealt with deployments since 2001.

“Greenlight a Vet” is a natural fit for Pine Canyon, a community filled with residents who regularly illustrate their support of military families. In fact, this summer’s Concert in the Park raised more than $8,000 for local veterans causes, thanks to the generosity of our members whose donations will give aid to 3,000 local veterans in need. As a result of the fundraiser, Pine Canyon Cares donated $6,500 to VFW post 1709 to support its Eric Lindstrom Memorial Scholarship, and $2,500 to the Northern Arizona Veterans Resource Center.

Organizers of the “Greenlight a Vet” campaign hope this campaign inspires the public to further support the troops and their families while also encouraging vets to seek the support they may need. The project’s other goal is to bring awareness to veteran advocacy groups, including the Institute for Veterans and Military Families at Syracuse University, Team Rubicon and Blue Star Families.

The campaign uses green lights as a symbolic sign of gratitude and because it “is the color of hope, renewal and well-being.” The term “greenlight” is also a term commonly used to motivate forward movement, according to the organizers of the campaign. The action of using green lights is intended to start a conversation about veterans, and “greenlight” them as valued members of the community.

Since 2016, the campaign has seen more than 9.3 million online acts of support as participants post pictures of their green lights using the hashtag #greenlightavet.

If you are interested in learning more about the “Greenlight a Vet” program and how you can participate, visit www.greenlightavet.com.