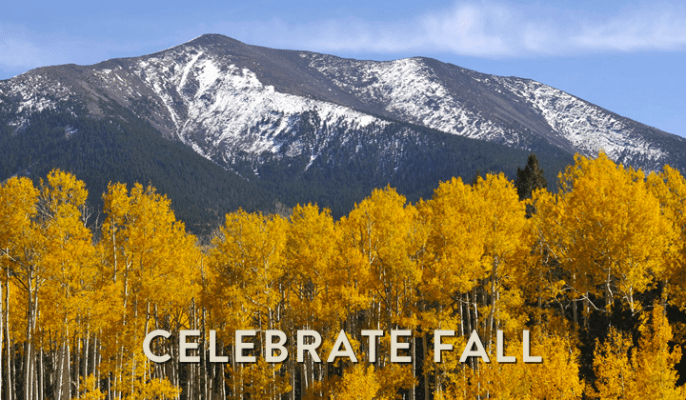 Flagstaff shows off a little in the fall, when those living in the Valley are still counting the days until they can shut off their air conditioning. Fall actually exists in Flagstaff, and to prove it, the trees in this mountain town create a colorful canopy of leaves that visually confirm the changing of the seasons.

The leaves atop the region’s white-trunked aspens are turning gold, creating a spectacular contrast against the evergreen fir and spruce trees that overflow from the surrounding Coconino National Forest. It’s one of those occurrences that is better experienced than read about. And, at Pine Canyon, it’s completely accessible.

Yes, you could walk out on your back deck at Pine Canyon and easily capture the season’s new colors. And for that we feel lucky. Of course, you could also venture out. There are so many great spots that highlight Flagstaff’s fall colors, from the ground or from the air. Here are some of our favorites.

Locket Meadow. Known for its fields of beautiful wildflowers, Locket Meadow is a prime picnic spot perfect for leaf-spectating with a side of general serenity. Offering views of the San Francisco Peaks, and dry camping, Locket Meadow is the starting point for a trail known as Inner Basin. And, it’s also home to mountain critters, including porcupine, elk and the occasional black bear.

Snowbowl. If an aerial perspective suits you better, the chairlift at Arizona Snowbowl offers an incredible top-down view of the area’s changing leaves. The chairlift runs daily from 10 a.m.-4 p.m. through mid-October to accommodate for the peak fall color season. The ride takes you up the western side of the San Francisco Peaks to an elevation of 11,500 feet, where you will catch views of the surrounding vegetation and rock formations. Details at www.snowbowl.ski

Trails. Flagstaff is ripe with trails that twist and turn through the area’s evergreen and aspen trees, which explode with golden leaves as the temperatures drop. One of those trails includes Wilson Meadow, a two-mile roundtrip hike that is great for novices or those exploring with kids. Aspen Nature Loop is another popular trek, taking hikers along an easy, 1.8-mile journey that includes views of the San Francisco Peaks and Kendrick Mountain. Bismarck Lane, which is described as a moderate hike, gives visitors a two-mile or seven-mile option, both of which are filled with wildlife and spectacular views.